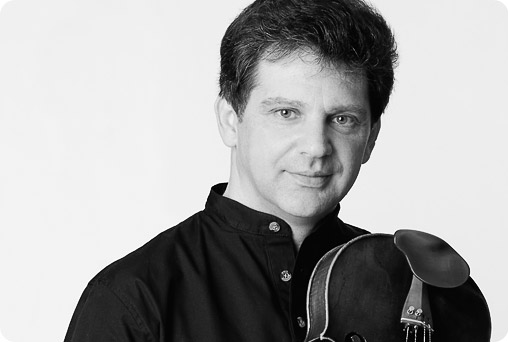 Review
“With wide, melancholic strokes, with clear sound, exactly intonated, with a refreshing intensity, he plays charming one time, then snorring, and then energetic up to a dark sweetness, that reminds of ripe cherries...”
Kiel Newspaper, 30th Nov., 2007
“This violist smiles at the notes and provides it as a wonderful music for the audience.”
Hamburg Newspaper, 5th Aug., 2007

from Lübeck was born in the Ukraine, he received his first violine instructions from his father when he was 5 years old. Soon he won several awards at different competitions. At the age of 13 he had his first public appearence and gave his orchestra debut. With 17 he changed his main focus from violine to viola and in 1979 he started his diploma studies at the State School for Music Lemberg. In 1984, he finished his artistic graduation and concert exam with summa cum laude from Prof. Z. Daschek. By receiving a scholarship from the Polish Culture Ministry he went to Danzig for further studies, where he graduated his extra studies.

As a passionate representative of his instrument, he tried, by intensive work as a solo player and chamber musician in East Europe, Germany, Denmark, France, Belgim, the Netherlands and Switzerland, to remove the prejudices the viola is confronted with. As an arranger and editor he has a part in working with renowned music publishing houses. This has enriched the viola-repertoire with the new words.

In 1998, the president of the Ukraine rewarded his efforts with the title “Well-deserved artist of the Ukraine”.
Semjon Kalinowsky is the initiative and musicial leader of the festival “Jewish Cultural Days Luebeck.